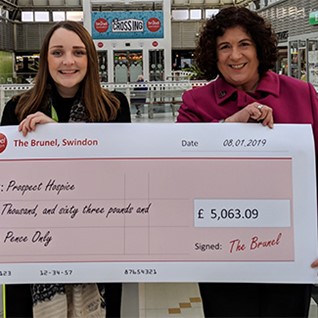 The Prospect Hospice gift wrap stall, in Swindon Town Centre’s Brunel Shopping Centre, raised more than £5000 this Christmas, bringing the total raised to more than £20,000 in the five years since it started.

Every year, throughout December, an army of Prospect Hospice volunteers descend on the shopping centre to wrap shoppers’ presents in return for a donation to the charity.  The initiative was started in 2014 and has grown each year since with this year’s total up by more than £400 on last year.  A second stall was added in The Brunel Arcade for Christmas 2018.

Hollie Ricketts is Community Fundraiser for Prospect Hospice.  Hollie said: “We are absolutely delighted with the amount raised this year and thrilled that in just five years the stall has raised £21,759.88!  We are very grateful to the team at The Brunel who welcome our volunteers and look after us all so well each year and, of course, to all of volunteers who worked so hard wrapping the presents this year.  We love putting on this event for the local community.

“I’d also like to sincerely thank everyone who used the gift-wrap service and made a donation.  This is an important annual fundraising event for the hospice and every penny raised goes straight into helping to care for our patients and their families.”

Jane Stewart, Centre Manager of The Brunel said: “We are delighted that the gift wrap stall idea has grown into something that is raising a significant amount of money for Prospect Hospice.  The Prospect charity is close to the hearts of many of Swindon’s residents and we are very proud to continue to support this event and to give our shoppers an opportunity to show their support for their local charity.  Breaking through the £20,000 mark is just fabulous!”

Prospect Hospice and The Brunel have confirmed that the gift wrap stall will return again in December 2019.  Anyone who would like to volunteer to wrap presents should contact fundraisingandevents@prospect-hospice.net.

Don’t miss out on the latest news and offers.

We use cookies on our website to give you the most relevant experience by remembering your preferences and repeat visits. By clicking “Accept All”, you consent to the use of ALL the cookies. However, you may visit "Cookie Settings" to provide a controlled consent.Cookie Settings
Cookie SettingsAccept
Manage consent

This website uses cookies to improve your experience while you navigate through the website. Out of these, the cookies that are categorized as necessary are stored on your browser as they are essential for the working of basic functionalities of the website. We also use third-party cookies that help us analyze and understand how you use this website. These cookies will be stored in your browser only with your consent. You also have the option to opt-out of these cookies. But opting out of some of these cookies may affect your browsing experience.
Necessary Always Enabled
Necessary cookies are absolutely essential for the website to function properly. These cookies ensure basic functionalities and security features of the website, anonymously.
Functional
Functional cookies help to perform certain functionalities like sharing the content of the website on social media platforms, collect feedbacks, and other third-party features.
Performance
Performance cookies are used to understand and analyze the key performance indexes of the website which helps in delivering a better user experience for the visitors.
Analytics
Analytical cookies are used to understand how visitors interact with the website. These cookies help provide information on metrics the number of visitors, bounce rate, traffic source, etc.
Advertisement
Advertisement cookies are used to provide visitors with relevant ads and marketing campaigns. These cookies track visitors across websites and collect information to provide customized ads.
Others
Other uncategorized cookies are those that are being analyzed and have not been classified into a category as yet.
Save & Accept